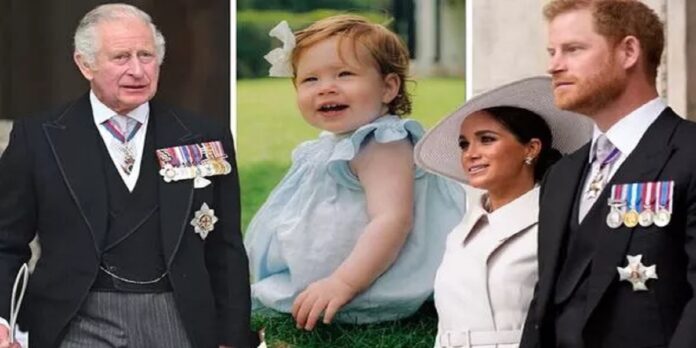 PRINCE CHARLES’ meeting with Lilibet was “weaponised” in the press despite Prince Harry and Meghan Markle’s wish for their children’s privacy, royal commentators have claimed.

Prince Charles and his wife Camilla, Duchess of Cornwall were spotted in west London on Wednesday, celebrating the return of the infamous Notting Hill Carnival. The street party has been cancelled for the past two years due to Covid, but will make its comeback at the end of next month. Charles and Camilla were welcomed to a mini festival by stilt walkers and performers in flamboyant outfits, as well as the musicians, and were treated to a flavour of the world-renowned event.

The Prince of Wales has recently been the focus of media attention for accepting a suitcase of cash from a controversial politician.

It was one of three lots of cash, totalling £2.6million, which the heir personally received from Sheikh Hamad bin Jassim bin Jaber Al Thani, the former prime minister of Qatar, between 2011 and 2015.

However, some royal commentators have argued that the news was “overshadowed” by news of Charles and Camilla’s meeting with Lilibet Diana — the one-year-old daughter of Prince Harry and Meghan Markle — which was said to be “very emotional”.

In this week’s episode of the Royally Obsessed podcast, hosts Roberta Fiorito and Rachel Bowie referenced the revelation, with Ms Fiorito saying: “Last week, there was another Charles scandal of him receiving money from inappropriate places after the money in foreknown bags and suitcases.

“But the news was overshadowed by the Clarence House spokesperson updating the press that Charles and Camilla actually did meet Lilibet during the Platinum Jubilee and also saw Archie again, so had a reunion with both of their grandkids while the Sussexes were in the UK.

“It’s just very odd the timing of all this, and when I say odd, it’s totally, barefaced, blatant use of innocent kids to distract from the bad news cycle.

Ms Bowie added: “And I just think that it’s not something Harry and Meghan would have sanctioned, because they are trying to keep their kids out of the press by not being in the UK. And yet Harry’s own father is dragging them back into the press.”

Ms Fiorito responded: “It felt like the information was weaponised. It was like they were holding it until they could use it to their advantage.”

Ms Bowie then raised the concern that more information and photographs of the meeting could be withheld onto until something “bigger and worse breaks.”

She added: “I think that Harry and Meghan are probably like: ‘We really didn’t want our kids in the press, and now you’re using them for this.’”

In Montecito, California, where the Sussexes now reside, the two children are rarely seen in public.

A photograph of Lilibet was released to mark her first birthday, but neither she or Archie were spotted during the four-day long celebrations to mark the Jubilee last month.

As reportedly requested by the Queen, Meghan and Harry maintained a low profile throughout the special weekend, and were only seen twice — briefly in the windows of Buckingham Palace during Trooping the Colour and then at the Service of Thanksgiving at St. Paul’s Cathedral.

Ms Fiorito and Ms Bowie pointed out the “irony” of Meghan and Harry being banned from bringing cameras to the Platinum Jubilee.

The Duke and Duchess of Sussex are understood to be in the process of filming an at-home style documentary series with Netflix.

Ahead of the Jubilee weekend, there had been concerns that Meghan and Harry would film the festivities as part of their docuseries.

A film crew was spotted filming the couple during their time at the Invictus Games in the Netherlands a couple of months earlier, and reportedly, during a trip to New York last September.

It is believed that the footage in the Netherlands was captured for an upcoming documentary series ‘Heart of Invictus’, which will also air on the streaming service.

Meghan and Harry signed the multi-million dollar deal with Netflix in 2020, a few months after their shock exit from the Firm.

The Sussexes are yet to release any content with the streaming giant.

The Duchess had been set to produce an animated series by the name of ‘Pearl’, but amid wider cost-cutting moves, the show was axed.

Meghan is understood to be working on a podcast series with Spotify, which the Sussexes also signed a huge deal with at the end of 2020, but no announcements have been made since March.

‘Archetypes’ — a podcast that tackles typecasting — is expected to launch this summer.