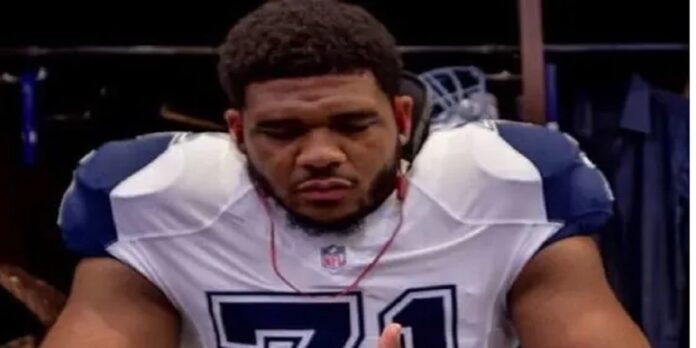 Dallas is in the midst of an assortment of moves as free agency opens this week.

FRISCO – The Dallas Cowboys have granted permission to starting right tackle La’el Collins to seek a trade, a development that could in theory lead either to a trade or Collins being cut.

And it seems there are already a half-dozen NFL teams now on the lookout.

We already know the Cowboys are taking trade phone calls on Collins – despite the thought that he “is one of the most outstanding offensive linemen in the country,” as team owner Jerry Jones said recently.

Collins is indeed talented. But his behavior – and cap concerns – could mean that the once-foundational piece at right tackle, just age 28, might be about done in Dallas.

And now? “At least six teams” have shown interest in Collins, as reported on Sunday afternoon by ESPN.

Dallas is in the midst of an assortment of moves as free agency opens this week. Amari Cooper was traded on Saturday. Michael Gallup was signed on Sunday. DeMarcus Lawrence is being asked to take a pay cut. The club wants to hang on to free agent Randy Gregory. And on and on and on …

One of the concepts in play: Dallas could save $10 million in cap room by making Collins a post-June 1 2022 release.

But a trade now? As we figure it (and we may be missing some change in Collins’ financial status following his 2021 suspension), a pre-June 1 trade of Collins would be enormously costly; Dallas would save just $1 million while swallowing $14 million of dead money.

Short of Dallas getting a standout and affordable player (or premium pick) in return, we struggle to figure how that makes any sense.

As CowboysSI.com has often reported, the Cowboys are disappointed by Collins’ general behavior. His complicated entanglement with his drug test suspension may have been, in the minds of some here inside The Star, a last straw of sorts.

But dump a blue-chip talent in the prime of his career? A protector (and close pal) of Cowboys QB Dak Prescott? If La’el Collins is being shown the door, it speaks to the deep decline in the organization’s belief in the player.

But with six teams in waiting? that also speaks to Collins’ talent level.