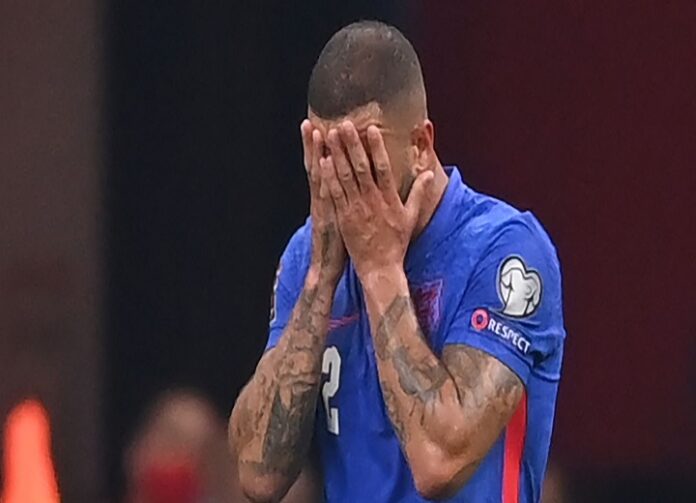 Who shone for England in Warsaw? Harry Kane scored a goal to remember in a display to forget, while Kyle Walker’s position may well now be under threat…

Could do nothing to prevent Szymanski’s late header but had only narrowly avoided calamity a few minutes earlier when his clearance was charged down and nearly rebounded over the line.

Showed admirable restraint when Poland appeared to deliberately attempt to needle England before half-time, although we are still a long way short of explanation for how and why neck pinching is now part of football.

But in general, this was a poor night for Walker, capped by him being beaten all ends up in the build-up to Poland’s leveller and his subsequent head-in-hands anguish. Nor had he impressed beforehand, with poor decision making spurning several attacking moments and his distribution regularly disappointing. The Manchester City right-back needs to do better – especially with Reece James and Trent Alexander-Arnold waiting in the wings.

Finished the night without a clean sheet but with lots of credit. Was about as solid as any centre-half could be when marking Robert Lewandowski – there are few tougher assignments in football – and shrugged off an ankle knock to be the mainstay of the defensive unit which all-but nullified the Poles for the final hour.

Close to giving England the lead before Kane’s opener when his header slapped a post – although Sterling was in an offside position, Maguire’s header would surely have counted had it gone straight in. No particular fault in his defensive performance, but could he and Stones have done more to stop England dropping deeper and deeper in the closing minutes? Maybe, but it’s equally reasonable to point out that while Poland made five substitutions, England did not make any, and Gareth Southgate was surely as culpable for England’s retreat as any of his on-field players.

Possibly a little slow to recognise the danger for Poland’s equaliser but Lewandowski’s cross was close to undefendable. An otherwise tidy display, albeit one with a few frustrations when his overlaps went either unrecognised by his team-mates or did not quite translate into clear-cut chances.

Very good. One of the few England players to emerge from the first half in credit and it’s because his positional discipline is so unwavering that Maguire has licence to bring the ball out from defence. Like Phillips, outstanding in the second half on patrol in front of the England defence as the visitors wrestled control.

Influence weakened by a ludicrous early caution, but improved markedly after the interval having struggled to knit together England’s attacking opportunities in the first half. Yes, there was a delicious half-volley to Grealish’s feet, but look again at the moment in the 33rd minute when he opted to pass wide to Sterling rather than forward to Kane when the England captain was through. But so much better in the second half with crisper and more direct passing.

Lots of nice touches, a scattering of threatening combinations with Grealish, but the impression remains that England still have not found the definitive answer to the question of where Mount fits into this England team. Is he a creator, an extra man in midfield, a link-man – or a bit of all three? Having been non-existent in the Euro 2020 final two months ago, he was no more than on the periphery in Warsaw – and any close examination of Poland’s equaliser will surely focus on his mishit clearance as a badly missed opportunity to clear the danger.

Frustrating and frustrated: the only distinguishing feature of Grealish’s display this Wednesday night was the regularity with which he remonstrated against the referee and his assistants. Somewhat surprising he lasted the 90 minutes, especially in the context of Poland’s late changes to pour men forward.

He will be criticised for failing to deliver a final ball or two, but the flip side of the same coin is that it was Sterling who time after time threatened the hosts and added menace to what was otherwise a rather bland England performance. Will be so interesting over the next month to see how often he plays for Manchester City and, more critically, how he plays. When he takes possession and looks to penetrate rather than pass, he is twice the player.
Harry Kane – 7

How to rate a display like this? A goal to remember and a display to forget. With the exception of one touch, Kane was poor, lacking finesse and looking sluggish. But what an exceptional touch it was when Kane fired his side ahead from long range with a shot utterly out of sync with everything else he did in the game. For great centre-forwards, and even when not at his best Kane is still a great centre-forward, one touch is all that counts.