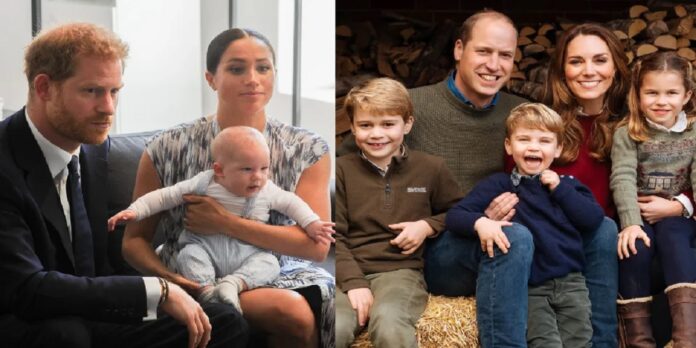 Ever since Prince Harry and Meghan Markle moved to America, Archie and Lilibet’s cousins George, Charlotte and Louis haven’t had many opportunities to get to know the Sussex kids—but Harry wants to change that. According to a source who spoke to Us Weekly, the Duke of Sussex doesn’t want to “rob” his children of the chance to have a relationship with their cousins across the pond. “Harry and Meghan are doing everything they can to make the world a better place and feel it would be wrong to rob their children of the opportunity of getting to know their cousins,” the insider told the site on January 31, 2022. The source went on to note, however, that while Harry wants his children to spend more time with the royal family, he won’t be bringing them to the UK until he knows it’s safe to do so.

“Harry has his heart set on returning to the U.K. to see the queen with Meghan, Archie and Lilibet, but that will only happen if the government takes the appropriate measures to protect his family,” the source explained. “He refuses to put them at risk. Their safety comes before anything else.”

Prince Harry—who currently resides in Montecito, California with his wife and kids—recently petitioned the British court to allow him to pay for private security during his future travels to the UK. After the British government refused his security proposal, however, the Duke of Sussex went on to file an appeal, insisting that he and his family require extra protection while visiting his homeland. According to Harry’s legal team, the duke plans to “personally fund” his own police protection, so as to “not to impose on the taxpayer,” and is simply requesting that his security receive “jurisdiction” abroad.

“That security cannot replicate the necessary police protection needed whilst in the UK,” a statement from Harry’s legal team read. “In absence of such protection, Prince Harry and his family are unable to return home.” In the meantime, Harry and Meghan are trying alternative methods of fostering a relationship between their children and the Cambridges—and it seems Prince William is also on board, even despite his rift with his younger brother. “It’s obviously difficult because of the distance factor, so Harry sweetly organized a special Zoom call with Prince William so that the cousins could get to see each other,” Us Weekly’s source noted. William, for his part, shares children Prince George, Princess Charlotte and Prince Louis with Duchess Kate Middleton.

While William is amenable to having his kids connect with Harry’s children over Zoom, the Duke of Cambridge is still said to be “appalled” by how his brother is “handling” his security concerns. “William sympathizes with Harry’s insistence on defending his family,” an insider told OK! Magazine on January 28, 2022. “But he’s appalled at how Harry’s handling the matter because of the stress it’s putting on The Queen and the monarchy.” For now, we’ll just have to wait and see if this matter gets resolved.