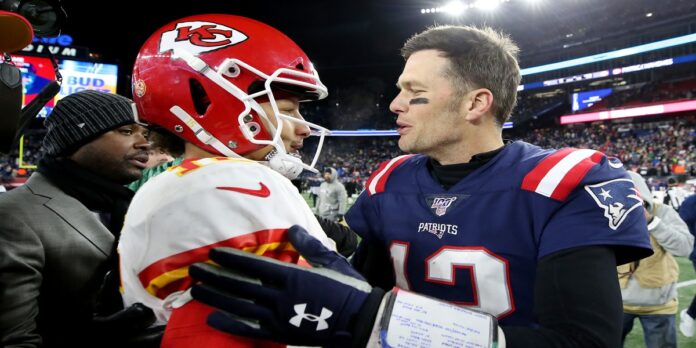 Two of the top signal callers in the NFL are meeting for the first time since Super Bowl LV, and their income is as impressive as their statistics .

When the Kansas City Chiefs visit Tampa Bay to take on the Buccaneers, the field will be filled with stars, but none will shine so bright as the two quarterbacks, Tom Brady and Patrick Mahomes.

While their statistics are impressive, and in the case of the 45-year-old Brady even legendary, their net worth is just as eye popping.

Having signed a ten-year, $450 million contract with the Chiefs, Mahomes also has a pretty hefty endorsement portfolio, with deals that include Subway and State Farm. Having led the Chiefs to four consecutive AFC Championship games, that is an income stream that will certainly increase in coming years.

Forbes sets Mahomes’ net worth at $51.5 million, but it comes a distant second to Tom Brady, who tops their list of quarterbacks with a net worth of $250 million thanks to $30 million per year salary plus the $45 million that he will earn from his endorsement deals.

More to the point, the length of time that Brady has been earning at this level means that his career earnings are north of $450 million, despite a reputation throughout his career for accepting less money in order to allow his team to sign other players.

If Mahomes stays in the game as long as Brady has, he can certainly earn an almost unlimited amount of money, but for the moment at least, Tom Brady is the top of the heap, both on the field and at the bank.