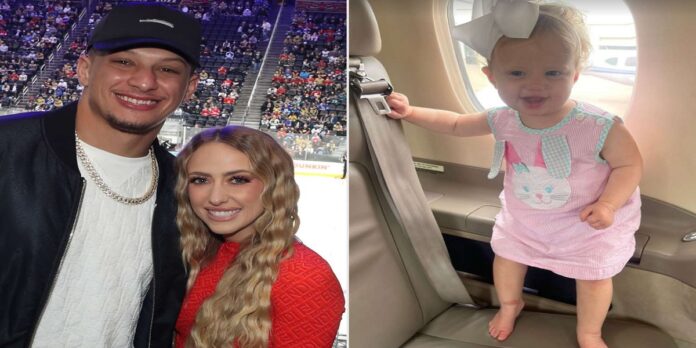 “I Want to Stay Out of the Way”: Patrick Mahomes Forced Himself to Take a Tough and painful Decision He Believes Is for the Benefit of His Kids

The NBA has LeBron James, who has said he wants to play with his son one day. There is also former MLB pitcher Pat Mahomes and his NFL quarterback son Patrick Mahomes. Many athletes want their children to follow in their footsteps. However, Patrick Mahomes II doesn’t know what the future holds.

Patrick Mahomes is not a strict parent

Kansas City Chiefs quarterback, Mahomes, said that he doesn’t want to shape the way his children think and act. “I want to stay out of the way and let it be about them,” said the Chiefs’ QB. Patrick and his wife Brittany Mahomes have a daughter Sterling Skye Mahomes. The couple recently announced the coming of their second child, a boy. Patrick and Brittany sure have some outstanding genes. But whether we will get to see them on the football or soccer field is not clear.

The 2020 Super Bowl MVP said that he wants to give his children all the necessary knowledge and options. However, he doesn’t want to force them to do anything. Mahomes learnt this from his father, Pat Mahomes, who was an MLB pitcher for multiple franchises like the New York Mets and the Boston Red Sox. According to the Chiefs QB, his parents never forced him into following their wishes. “They let it be about me, let me out there and have fun. I think that’s why I’m in the position I am today,” Mahomes added about his father.

The future is bright for the Mahomes kids, but not necessarily in sports

Mahomes’ one-year-old daughter Sterling recently accompanied her mother Brittany to one of her father’s football games. Brittany is also a former professional soccer star. And daughter Skye surely loved the atmosphere. So Mahomes is clearly letting his child figure things out for themselves even if it’s past her bedtime.

Patrick Mahomes and his wife Brittany are high school sweethearts who officially tied the knot this year in Hawaii. Mahomes enjoyed Halloween recently with his family and the trick-or-treat pictures broke the internet. Whether the kids will become professional athletes like their parents, only time will tell.

After this bye week, Mahomes and the Kansas City Chiefs face Derrick Henry and the Tennessee Titans in Week 9 of this NFL season. Can Father Mahomes maintain his good form this season and win his second Super Bowl with the Chiefs?