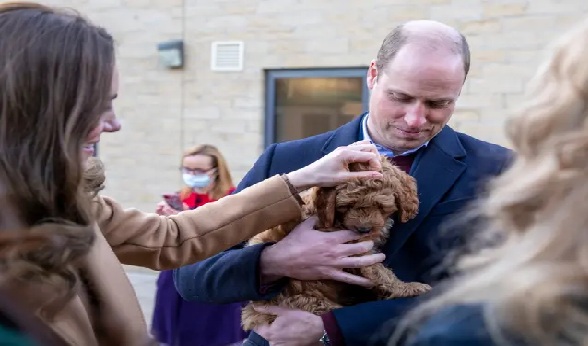 Kate Middleton joked that her family dog is “going to be very upset” with her after she spent time cuddling a therapy puppy during a visit to a hospital this week.The Duke and Duchess of Cambridge travelled to Lancashire on Thursday 20 January to meet with staff at Clitheroe Community Hospital and thank them for their efforts during the pandemic.

Video footage of the visit showed the couple meeting Alfie, a 10-week-old cockapoo who will be trained to support patients and colleagues as a therapy dog.
Kate was first to enjoy a cuddle with the pup, describing him as “so sweet”, before encouraging William to do the same.
As a member of hospital staff explained that Alfie will begin working as a therapy dog once he is seven months old, the cockapoo could be seen affectionately licking William’s face.

“Yeah, ‘who have you been seeing?’” William added.

The couple also met with GPs, nurses and patients at the hospital.

“We’re so grateful for all your hard work,” the Duke said. “I’m not sure there are enough words to say how grateful everyone is for what you have done.”

The hospital, which is in one of the areas of the country worst affected by Covid-19, has received a grant of more than £300,000 from NHS Charities Trust (NHSCT).

NHSCT, of which the Duke and Duchess of Cambridge are joint royal patrons, is an organisation of more than 250 charities working to support NHS staff, volunteers and patients.
The grant has allowed the hospital to purchase new equipment for the wellbeing team, as well as a new therapy dog, Alfie.

“We talked about how difficult it was for patients and families being separated by visiting restrictions. She was really engaging,” Logan said.

During the Lancashire trip, the royal couple also paid a visit to Church on the Street, a centre that helps people who are struggling with poverty, homelessness, addiction and other problems.

“I know how you feel,” the Duke of Cambridge said. The Duke’s mother, Princess Diana was killed in a car crash in 1997 when he was 15 years old.

Resting his hand on Glover’s shoulder, William added: “It gets easier.”