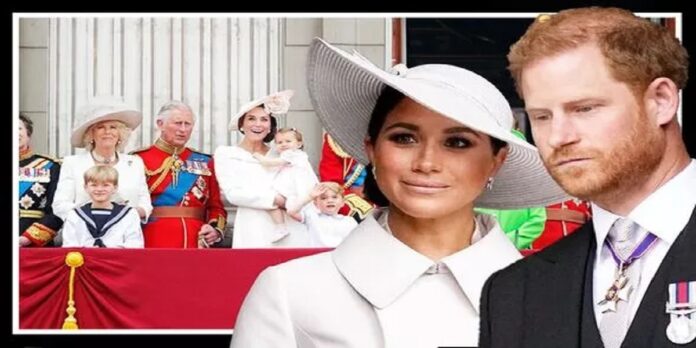 MEGHAN MARKLE and Prince Harry’s spectacular Royal Wedding, many said, was a sign of a modernising monarchy. However, the couple later left the Firm in a shock exit and, four years on, tensions within the House of Windsor seemingly remain. Where did it all go wrong? Express.co.uk investigates.

Meghan Markle and her husband Prince Harry are the focus of a new bombshell book which hit shelves on Thursday. ‘Revenge: Meghan, Harry and the war between the Windsors’ chronicles the breakdown of the Duke and Duchess of Sussex’s relationship with the Royal Family. Investigative journalist Tom Bower conducted extensive research and sourced interviews with insiders who have never spoken out before, attempting to untangle the web of a family at war.

When Prince Charles’ youngest son’s engagement was announced to the world, it was a signal of a modernising monarchy.

It harked back to an infamous moment when Edward VIII abdicated the throne to marry Wallis Simpson and in doing so, changed the future of the Royal Family for good.

In order to marry the American divorcee, the King had to give up the throne, subsequently causing a constitutional crisis.

Edward’s younger brother George VI then ascended the throne, paving the way for his eldest daughter — our current Queen — to one day become monarch and embark on her historic 70-year reign.

Edward and Wallis became the Duke and Duchess of Windsor, left the UK and spent the majority of their lives in France — in semi-exile and retirement from royal duty.

Their exit has often been compared to ‘Megxit’ which saw the Duke and Duchess of Sussex step down from their senior positions within the Firm.

However, the two couples’ circumstances were entirely different, while Edward could not marry the woman he loved due to royal stricture, Meghan was reportedly welcomed into the Royal Family and the Sussexes were celebrated as a glimpse into the future of the monarchy.

In May 2018, 82 years after Edward VIII abdicated from the throne, Harry married Meghan — herself an American divorcee — in an incredible Royal Wedding at St George’s Chapel.

The couple were lauded as a breath of fresh air that the British monarchy needed and their union marked a move toward a more integrated modern future from the House of Windsor.

Roya Nikkhah, royal editor at The Sunday Times, told NBC News at the time that Meghan “has so much more in common with the rest of the world than members of the aristocracy or blue-blooded people who’ve traditionally married into the Royal Family.”

She continued: “The Queen and other members of the Royal Family have done a very good job of moving with the times when it comes to adapting the Royal Family to seem modern and relevant,” adding, “the freshness and sort of youthful vigour of Harry and Meghan is going to speed that along.”

While Meghan and Harry did provide hope for a modern monarchy, their relationship did not come without difficulties. The pair faced a media frenzy when their romance came to light, so much so that the Duke of Sussex’s spokesperson had to issue an unprecedented statement asking for his then-girlfriend’s privacy.

The statement read: “It is not right that a few months into a relationship with him that Ms. Markle should be subjected to such a storm. This is not a game — it is her life and his.”

Ahead of their wedding, the life of Meghan’s father Thomas Markle was magnified in the press. The former Hollywood lighting director had participated in staged photos and later decided not to attend his daughter’s nuptials, meaning he would not be walking her down the aisle as planned.

In October, excerpts of a private letter from Meghan to her father were published by the Mail on Sunday; the Duchess wrote Thomas had “broken her heart into a million pieces.”

Meghan sued the publication over the five articles that reproduced the letter and, three years later, emerged victorious from the legal battle. In a statement following the ruling, the Duchess of Sussex said: “This is a victory not just for me, but for anyone who has ever felt scared to stand up for what’s right.”

It was at this time that reports of rumblings within Kensington Palace surfaced.

In November 2018, Meghan and Harry announced that they would be moving out of Nottingham Cottage, on the grounds of Kensington Palace, where Harry’s older brother Prince William, his wife Kate, Duchess of Cambridge and their children live, and take up residence in Frogmore Cottage in Windsor.

The announcement came soon after their tour of Oceania, which was deemed a great success and saw the couple greeted by crowds of well-wishers.

It has since been claimed that the Duke and Duchess of Sussex expected more credit upon their return to the UK.

In her best-selling book ‘The Palace Papers’, which was released earlier this year, Tina Brown wrote: “Meghan seemed to interpret the success as a call for Brand Sussex to be elevated in the Palace hierarchy.”

Instead, the Duchess “felt snubbed that there was no particular display of Palace appreciation.”

It has also been claimed that Meghan and Harry did not like that Kate and William were a priority within the Firm.

In May 2019, Meghan and Harry welcomed their first child. Harry could barely contain his glee when he announced that his son — Archie Harrison — had been born, and he and Meghan later introduced him to the world with a photograph at Windsor Castle with Queen Elizabeth II and Prince Philip.

However, rumours of a rift between the brothers continued to grow and in June, it was announced that the Duke and Duchess of Sussex would split from the Royal Foundation, established by William and Harry in 2009, and create their own.

Meanwhile, in the same documentary, Meghan gave insight into how she was coping as a working royal, telling interviewer Tom Bradby: “Not many people have asked if I’m OK.”

Just two months later, it was announced that the Duke and Duchess of Sussex would be taking a break over the festive season, and rather than spending it in Sandringham, choosing to fly to Canada where Meghan’s mother Doria Ragland was spending Christmas.

In January 2020, they announced their semi-resignation, which was confirmed as permanent a year later.

And perhaps their biggest bombshell to date came a few months later, in March 2021, when Meghan and Harry sat down for a tell-all interview with Oprah Winfrey, during which they made serious allegations about the Palace’s handling of issues such as race and mental health.

They cited their reason for leaving the Royal Family as a “lack of support and lack of understanding.”

The couple has since forged a completely new life in the US; they now reside in Montecito, California, an affluent suburb of Santa Barbara, with their children Archie and Lilibet.

They have pursued new career paths, including signing multi-million pound deals with streaming services, setting up their own non-profit Archewell and turning their focus to philanthropy and activism.

The family-of-four returned to the UK for the first time last month to mark the Queen’s Platinum Jubilee. While it was widely seen as an opportunity for reconciliation, it appeared that underlying tensions still remained, particularly between the Sussexes and the Cambridges.

Meghan and Harry sat on the opposite side of St Paul’s Cathedral to Kate and William during the national Service of Thanksgiving for the monarch.

Had ‘Megxit’ never happened, the Duke and Duchess of Sussex may have sat alongside the heirs to the throne and their wives.

The couple jetted back to the US before the Jubilee celebrations came to a close, returning to a life far, far away from the royal world of Windsor.

While some commentators have suggested that Harry is unhappy with his American life and misses his old existence as a British prince, the Duke himself has insisted that the US “feels like home”.