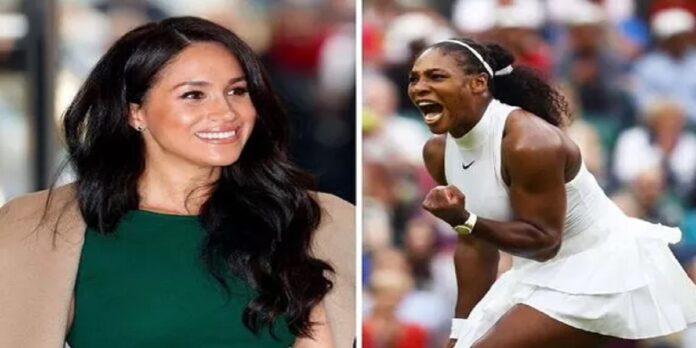 SERENA WILLIAMS reportedly DENIED being friends with Meghan Markle, a new book on the Duchess had claimed.

Vanity Fair writer Sam Kashner claimed the star tennis player said she was simply an “acquaintance” of Meghan. The Duchess had given Kashner a list of her friends in a previous interview, but upon calling Williams, who was on the list, she denied her friendship claim.

Upon answering the call, Serena Williams supposedly called Meghan an acquaintance, and said: “You’ve got to be who you are, Meghan. You can’t hide.”

The tennis player will continue her comeback next month at the National Bank Open in Toronto, Canada.

She has signed up to play at one of the US Open warm-up tournaments beginning on August 8.

She returned to competitive tennis in doubles at Eastbourne last month after retiring following an injury in her first-round match at Wimbledon last year.

Before this year’s Wimbledon she said: “I didn’t retire. I just needed to heal physically, mentally.

It comes as Meghan’s highly-anticipated biography will be released next week.

Biographer Tom Bower, known for unflinching takes on his subjects, will see ‘Revenge: Meghan, Harry and the war between the Windsors’ hit the shelves on July 21.

The account, released by Blink Publishing, will “tell the truth”, Mr Bower has previously said.

Publicity material for the book said the biography will lean on “interviews from insiders who have never spoken before”.

“From courtroom dramas to courtier politics, using extensive research, expert sourcing and interviews from insiders who have never spoken before, this book uncovers an astonishing story of love, betrayal, secrets and revenge.”

The book has been previously described as one the Duchess “will be dreading” by an author who “doesn’t pull his punches”.

An anonymous source told The Sun: “This is the book Meghan will be dreading.

“Tom doesn’t pull his punches and is terrifyingly thorough in his research. No stone will be left unturned.”

Mr Bower has previously slammed the Duchess of Sussex as having “trampled on all those on the way”, and that he had come across a number of “skeletons in the closet”.