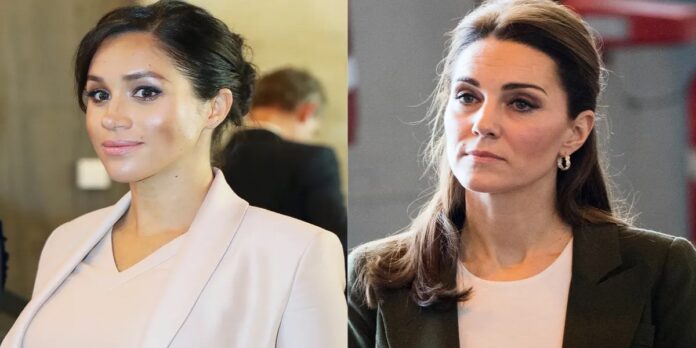 Meghan Markle made Kate Middleton “burst into tears” by cruelly comparing Princess Charlotte to her best friend’s daughter ahead of the Duchess of Sussex’s royal wedding, a bombshell new book claims.

It has long been rumoured that Meghan made Kate cry over the length of the bridesmaid dress Charlotte was told to wear for the duchess’ wedding to Prince Harry in 2018.

Meghan claimed in her Oprah interview that it was actually Kate who made her cry during the disagreement, but a stinging new book tells another story altogether.

According to MailOnline, the book claims that Kate had been “tired” following the birth of her third child Prince Louis and was “irritated’ by claims Meghan had been bullying staff.

The Duchess of Cambridge was supposedly “too fatigued” for an argument with Meghan over whether the bridesmaids should wear tights, but said that royal protocol suggested that they should do so.

But Meghan reportedly stood firm. Her “insistence was supported by Jessica, the mother of Ivy”.

They also disagreed about the hem of the dress, which Kate “felt was too short and anyway did not fit”, the book claims.

The Duchess of Sussex claimed during the interview with Oprah that it was she who had cried.

“She [Kate] was upset about something, but she owned it, and she apologised. And she brought me flowers,” she said.

“A few days before the wedding, she was upset about something pertaining – yes, the issue was correct – about flower girl dresses, and it made me cry, and it really hurt my feelings.

“And I thought, in the context of everything else that was going on in those days leading to the wedding, that it didn’t make sense to not be just doing whatever everyone else was doing, which was trying to be supportive, knowing what was going on with my dad and whatnot.

“It wasn’t a confrontation, and I actually think it’s… I don’t think it’s fair to her to get into the details of that, because she apologised.

“What was hard to get over was being blamed for something that not only I didn’t do but that happened to me.

“And the people who were part of our wedding were going to our comms team and saying: ‘I know this didn’t happen. I don’t have to tell them what actually happened’.”

The bridesmaids did not wear tights at the wedding.

At Prince William and Kate’s wedding, they did wear tights.

The Duchess of Cambridge has never commented on the issue.