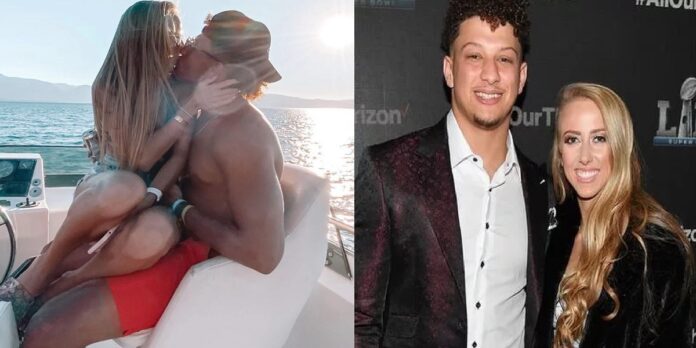 Inside Patrick Mahomes and Fiancée Brittany Matthews’ Relationship :The athletic power couple, who welcomed their first child together last year, plan to wed in 2022.It’s been a whirlwind three years for Kansas City Chiefs quarterback Patrick Mahomes and wife-to-be Brittany Matthews. The NFL star, who made his second Super Bowl appearance in 2021, has welcomed plenty of life milestones alongside his soaring football career. After his victorious 2019-2020 NFL season, where he led the Chiefs to win Super Bowl LIV, their first Super Bowl appearance in 50 years, he became the youngest quarterback to ever be named MVP at age 24. He went on to sign a record-breaking 10-year, $503 million contract—the biggest in the history of sports. In 2021, Mahomes once again led the Chiefs to the Super Bowl (where they ultimately fell short against Tom Brady and the Tampa Bay Buccaneers). Now, with strong performances in the 2022 season, Mahomes continues to make headlines as he looks for another Super Bowl run.

Off the field, Mahomes experienced plenty of personal wins too. In 2020, got engaged to longtime love Brittany Matthews, a personal trainer and fitness entrepreneur. Just months later, they welcomed their first child shortly after Super Bowl LV. Now, the couple are enjoying their journey into parenthood while also planning a wedding. We break down everything you need to know about the famous duo below, along with predictions for their highly-anticipated nuptials in 2022.

Patrick Mahomes and Brittany Matthews have been with each other since the beginning. The childhood sweethearts met at Whitehouse High School in Whitehouse, Texas, and even attended prom together in 2013. They occasionally share sweet throwback photos documenting their early days as a young couple.

Matthews has been a constant supporter throughout Mahomes’ record-breaking career. In February 2020, she gushed about his accomplishments while on the famed post-Super Bowl trip to Disney World. “I am so beyond proud of this dude and this team,” she wrote on Instagram. “All year it was about battling, amazing comebacks and overcoming an injury, and for that YOU DESERVE THIS, no better way to end it than at this Magical Place!!”

Patrick Mahomes got engaged to Brittany Matthews on August 1, 2020. The romantic proposal, which happened one day after Matthews’ 25th birthday, took place in a VIP box at Arrowhead Stadium in Kansas City, Missouri, just after the team received their Super Bowl 54 rings. The bride-to-be shared a glimpse into the proposal set up on Instagram, which included lavish arrangements of white flowers and light-up marquee letters that said “Will You Marry Me,” writing, “So this happened today!”

The NFL star gave the first look at Matthews’ engagement ring, writing, “Ring SZN” and tagging his new fiancée. The ring is an elongated emerald-cut diamond placed on a double pavé band.

The couple then enjoyed a private candle-lit dinner. “My heart is so full,” Matthews wrote on Instagram. “Couldn’t imagine this day being any more perfect!”

The moment didn’t come without a few jitters though. In an interview with 610 Sports Radio, Mahomes later confessed that proposing was more nerve-wracking than the fourth quarter of Super Bowl LIV (when he led his team to a come-from-behind win). “You don’t think it’s going to be nerve-wracking, especially when you’ve been with someone for so long, but before you get on that knee, your heart’s racing, I promise you that,” he said.
Brittany Matthews & Patrick Mahomes’ Baby Girl Joins The Family

In October 2020, just two months after getting engaged, the couple announced they were expecting their first child together, due in February 2021. “Mom & Dad, taking a small detour to the wedding❤️,” Matthews captioned the reveal on Instagram, which highlighted her growing bump. The two openly gushed about their excitement for their first baby. “Hopefully right after the Super Bowl, I’m able to bring a little girl into this world,” Mahomes remarked on Kansas City radio show The Drive in December. “And [I] get to become a dad in the offseason and get to see that process as well.”

Mere weeks after Mahomes made his second Super Bowl appearance, he and Matthews welcomed their daughter, Sterling Skye, on February 20. Mahomes posted a photo of his baby girl’s newborn hand wrapped entirely around his fiancée’s finger. Matthews added on her Instagram page that the child weighed in at six pounds, 11 ounces.

Unsurprisingly, it didn’t take long for their little one to attend her first sporting event. The couple, who openly document their journey into parenthood, shared photos of Sterling’s first Kansas City Royals baseball game on Opening Day 2021 with her parents. (She even wore a custom Mahomes shirt for the occasion.)

After two Super Bowls, an engagement and a baby, Brittany Matthews and Patrick Mahomes’ wedding planning process is finally underway. The bride-to-be alluded to their upcoming nuptials in an Instagram post in March 2021. “It’s wedding planning time,” she captioned a photo with her fiancé. “We have a date & place wahoooooo,” adding “#2022.”

So, what will Brittany and Patrick’s wedding look like? As we await the couple’s next milestone, we break down six things we expect to see on their wedding day.

Before the to-be-weds welcomed Sterling, they were already proud dog parents to pups Steel and Silver. In fact, the pooches have amassed an impressive following of their own: their shared Instagram account has over 200,000 followers. While the dogs can’t always attend their dad’s football games, they often show their pride from home, wearing KC-emblazoned bandanas, collars and shirts.

Since both pups have been present for so many of the couple’s milestones, it’s only fair to assume they’ll be at the wedding too. Whether they have their own moment to walk down the aisle or they make an appearance at the reception, we predict Silver and Steel will be important members of the couple’s wedding party.

Loved Ones Will Play a Key Role

A glance at the couples’ social feeds shows the importance of family and friends, indicating they’ll be heavily involved in the wedding celebration. Extended members of both families frequently attend Mahomes’ football games both in Kansas City and throughout the country. Matthews also has a close relationship with Mahomes’ younger brother, Jackson, who is expected to have a position in the wedding party.

The couple gave a glimpse into their tight-knit inner circle through photos from their baby shower in December 2020. Then a mom-to-be, Matthews shared a carousel of photo booth pictures with close friends and family members, writing “Baby Girl will have the most amazing people around her.”

Texas-based NBC News affiliate KETK also spoke to three of Mahomes’ friends from high school football in early 2021, who confirmed their relationships have grown stronger over the years. “It seems like a lot of people are astonished by the type of friendship that we have,” one friend told the network. “But to us, we made that decision a long time ago. We decided that we were going to be friends and that we were going to have each other’s backs through the thick and thin.”

Since Mahomes signed a 10-year contract with his team, the couple placed their roots in Kansas City. But, given their strong ties to Whitehouse, Texas, we expect them to host their nuptials in the place where they met and fell in love. We wouldn’t be surprised, though, if they host multiple wedding events in both destinations to include all of their loved ones.

The Bride Will Wear Multiple Outfits

Brittany Matthews is a style influencer in her own right. The entrepreneur has a line of virtual fitness and training programs, which are accompanied by a collection of athletic merch. But she’s also not one to shy away from trendsetting fashion choices outside of the gym. Her sideline outfits have become a phenomenon of sorts—she’s often seen wearing custom Mahomes gear for games. But if her baby shower and maternity photoshoot dresses are any indication, her wedding outfits will be just as unforgettable as her game day looks.

The expectant mom stunned in a pink metallic dress for her baby shower. She also shared photos of multiple lavish dresses she wore for maternity photoshoots, two of which included gauzy tulle fabric and statement ruffles.

Given this, we expect the bride (and perhaps the groom) to wear multiple wedding outfits throughout the celebration. We wouldn’t be surprised if baby Sterling shows off a few memorable wedding looks too.

If one thing’s certain, it’s that Patrick Mahomes and Brittany Matthews know how to throw a party. Take their proposal and baby shower as proof. Both events had over-the-top design styles, complete with light-up marquee letters, balloon installations, lush floral arrangements, candles and custom signage. The same will likely be true for the wedding day.


Expect to see plenty of fresh flowers and petals scattered throughout the venue, custom signs touting their newlywed status, and lots of balloons and romantic mood lighting. We also expect to see subtle details that give a nod to Kansas City or Mahomes’ football team.

Many sports commentators and fans regard Patrick Mahomes as the face of the NFL. Not only has he broken numerous records throughout his career, the National Football League Players Association announced in January 2020 that Mahomes surpassed Tom Brady as the top merchandise seller. Because of his influential role in the league, we expect some of Mahomes’ teammates, like Travis Kelce, to be in attendance on the big day.

We also wouldn’t be surprised to see appearances by other top athletes, like former NFL star Aaron Rodgers. The pair became friendly after appearing in a number of State Farm commercials together, with Rodgers calling them “Mahomies” on-screen. Perhaps the two might even swap wedding planning advice, as Rodgers is currently planning a wedding to actress Shailene Woodley as well.