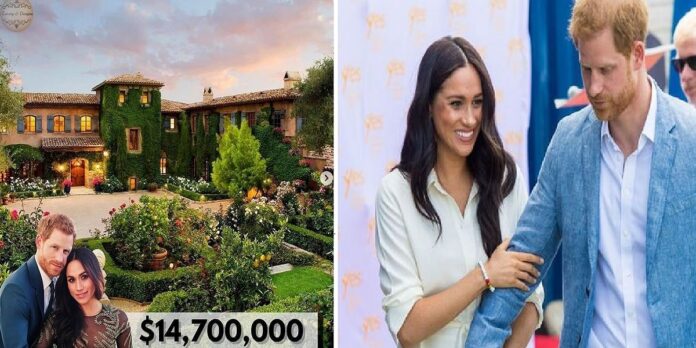 Prince Harry and Meghan Markle are reportedly planning to move from their palatial $19.25 million mansion in the super wealthy enclave of Montecito, California.

The Duke and Duchess of Sussex may be looking to relocate their young family, following reports that the couple are “hunting for a new estate” in the coastal Santa Barbara suburb of Hope Ranch.

Prince Harry and Meghan Markle are both reportedly keen to wave goodbye to their palatial $19.25 million mansion in the super wealthy enclave of Montecito, California, according to the Santa Barbara News Press.

The Californian newspaper revealed the pair have determined that their Montecito home which features nine bedrooms, 16 bathrooms, a spa, tennis court, outdoor pool, private playground and a guest house “does not properly accommodate them”.

The Sussexes purchased the property in the same neighborhood as Oprah Winfrey and Katy Perry two years ago, however, in January a source told the Daily Mail they wanted to raise their children Archie, 3, and Lilibet, 1 , in a house they’re more fond of.

“They want to stay in the neighbourhood or nearby, but they aren’t over the moon about the house or the location,” the insider said.

Hope Ranch is one of the most stunning and private enclaves in Santa Barbara which stretches across almost 2,000 acres along the Santa Barbara coast.

Tucked between the Pacific Coast’s crystal clear waters and the Santa Ynez mountain range, Hope Range is home to a number of celebrities including rapper Snoop Dog.

It comes amid reports that there are “heightening tensions” between King Charles III and the Duke and Duchess of Sussex over the future of Archie and Lilibet’s royal titles.

The line of succession shifted following the death of Queen Elizabeth II and the Duke and Duchess of Sussex’s two children, Archie and Lilibet, automatically became Prince and Princess.

However, according to The Times royal editor Roya Nikkhah, Meghan and Harry “fear the King may strip Archie and Lilibet of their titles, after his reluctance immediately to recognise their elevated status after the Queen’s death”.

A source close to the 73-year-old told Vanity Fair that the King may forbid his grandchildren from using His and Her Royal Highness titles and Prince and Princess because of Meghan and Harry’s upcoming projects.

The source revealed it would depend on what happens in the coming months, especially as the Royal family braces itself ahead of Harry’s tell-all book whose release date has not been confirmed.