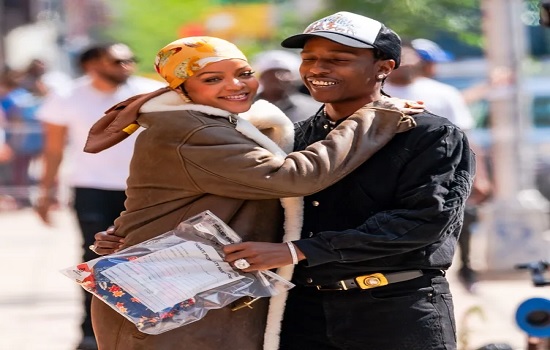 While Rihanna and A$AP Rocky like to keep things low-key, Riri recently proved that she is the number one fan of her boyfriend and rapper. The Diamonds singer was seen dressed in a head-to-toe striking red ensemble as she sang and danced along her BF’s performance from the front row of Long Beach Convention & Entertainment Center. If you didn’t know, A$AP Rocky was the headlining performer of ComplexCon and he performed his 2011 debut mixtape LIVE. LOVE. A$AP for the very first time in the Fenty Beauty founder’s presence.

While they have been photographed making their way in and out of many private date nights, prior to this, their previous public outing as a couple was at the 2021 Met Gala back in September. The duo has been friends for over a decade and have been dating for a little over a year, although it isn’t confirmed when they started dating.

As they have been friends for much longer than being in a relationship, the duo always ensures they support each other’s work. Back in September, Rihanna told People that A$AP Rocky was “proud of what I’ve been able to accomplish and all of my designs” in her latest Fenty lingerie collection. Back in May, A$AP Rocky told GQ that Rihanna was “my lady” and “the love of my life, I think when you know, you know. She’s the One. She amounts to probably, like, a million of the other ones,” he said.