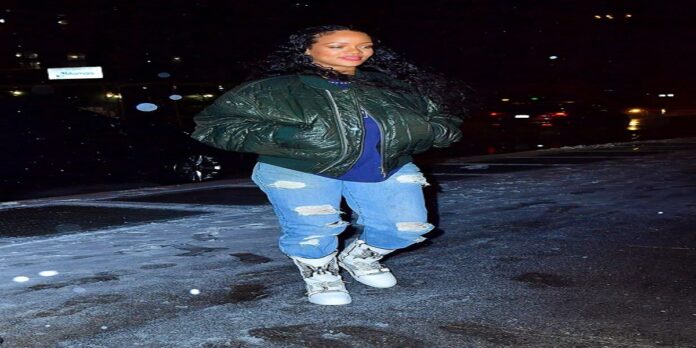 Rihanna proved she has refined taste as she rocked a $4k pair of white boots with a beautiful black butterfly design on her way to dinner with ASAP Rocky in NYC.

Rihanna, 33, stepped out in some fancy footwear for a date with her boyfriend ASAP Rocky, 33 on Sunday, Jan 16. The Fenty Beauty founder rocked some white Louis Vuitton boots with a hefty $4k price tag as she walked through the coating of snow. The designer shoes are almost a sneaker-boot-hybrid as the bottom half of the shoe had shoelaces, a velcro snap and grey and black paneling while the top half had a beautiful black butterfly design and went up to her mid-calf. 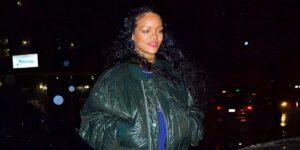 The rest of the “Umbrella” singer’s outfit was just as trendy as she sported a black leather jacket with a crinkled pattern, a blue top and ripped jeans. Rihanna certainly looked fashionable as she strutted down the streets of New York City. She was on her way to meet her beau ASAP Rocky for dinner before heading over to his recording studio.

The “Diamonds” singer and “Everyday” rapper have been growing closer by the day. They were spotted in West Hollywood on another date night earlier this month. They bundled up for the California cold as they headed to celebrity hotspot Nobu for dinner. Ri also took the rapper to Barbados for the holidays to spend time with her family.

The power couple was first romantically linked together in November 2020 with ASAP Rocky confirming their relationship in 2021. Even though they’ve only been dating for less than two years, dating rumors have circulated around the close friends for years. Now, a source tells HollywoodLife EXCLUSIVELY that they’re ready to tie the knot, and that “it’s only a matter of time before [ASAP Rocky] proposes!”

They’re also ready to start a family together. “Rocky absolutely feels that Rihanna is the perfect person for him, and he can’t imagine his life without her. They have discussed marriage and kids. They know it’s something they both want,” our source revealed. “Despite their romance heating up as quickly as it has, they’ve had time to lay the foundation for a great relationship since they were friends for so long before they hooked up.”