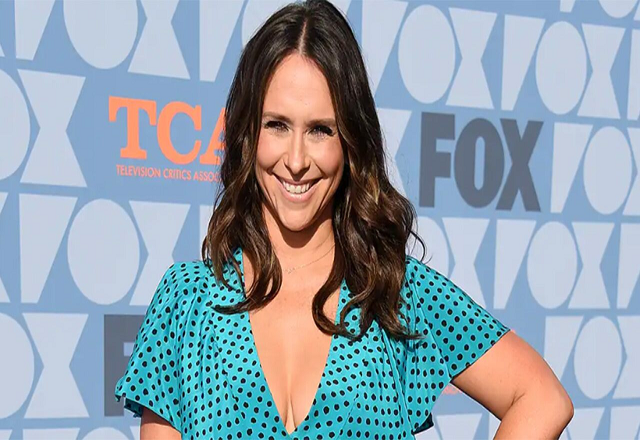 Jennifer Love Hewitt has been hard on herself for her red carpet looks. But it’s hard to see why as she has often looks incredible in her cute outfits that make the most of her youthful looks.

One Thursday evening the Ghost Whisperer actress looked lovely in a floral dress as she attended the Fox summer party in Los Angeles.

The I Know What You Did Last Summer star wore a 1950s style dress that was low cut in front and had a wide, full skirt that went below her knees. Hewitt added pointy black pumps and had her hair down with alluring red lipstick.

She posed like a pro, showing off her light pink manicure and a winning cover girl smile.
The ex of John Mayer said she was ‘excited’ to be back on Fox during the Television Critics Association Summer Press tour to promote her new role on 9-1-1.

The actress rocked an electric pink blazer paired with denim trousers for the friendly panel, just months after apologizing to fans for looking ‘wrecked’ during a red carpet appearance in New York. Jennifer’s business-casual ensemble was complete with a black-and-white striped tank top worn underneath her loud jacket.

She rolled up the sleeves to her coat and added a bit of flair to her chic look with a pair of black velvet heels. Her glossy brunette hair was styled in natural waves with just a touch of makeup worn to highlight her already beautiful features.

She previously admitted to her fans on social media that she wasn’t quite prepared for her return to the red carpet in May and ended up looking like a ‘hot mess.’‘

Nobody tells me the day is going to be like 12 hours long and that the humidity is going to be almost 100 per cent in New York City,’ she said in the series of clips. ‘So I just have to apologize.’

Despite the trying times, Jennifer is set to portray Maddie, the sister of Buck (Oliver Stark), on 9-1-1, and it is her first time working since she has become a mom.

‘I’m really excited to be back at Fox. It’s been part of what has made this so heartwarming. Fox really started my career with Party of Five,’ Hewitt said during the panel, according to USA Today.

One thing Jennifer is looking forward to about her new gig is working with a stellar cast, which includes Angela Bassett, Peter Krause and Ryan Guzman. ‘It’s nice not to have it all on your shoulders,’ she admitted. ‘I (can) be a mom first.’